Bentspoke Brewery- the short of it. 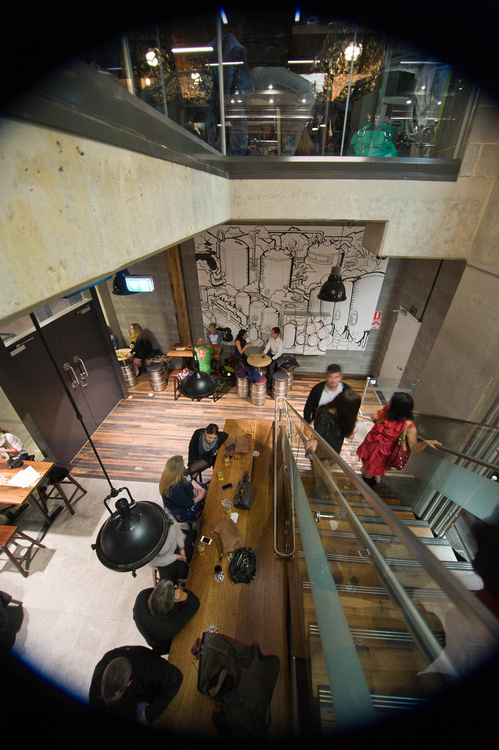 The Humans of the Brochure were invited to go on a taste-and-see tour of Bentspoke Brewery in Braddon this evening. 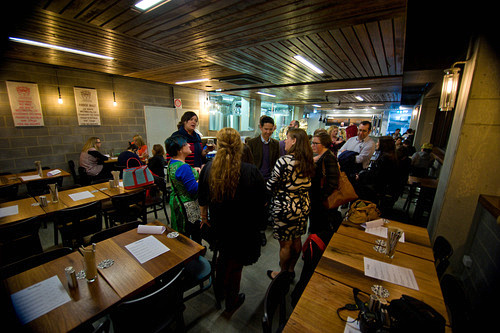 Unsurprisingly, it was one of our best attended events thus far.  :)  I rarely drink and would know nothing about beer, so if you are hoping for a review based on beer and cider tastings, sorry!!
The uber-new Bentspoke Brewery is a bar, micro brewery and restaurant with highly regarded and established brewer Richard Watkins and his partner Tracy at the helm.

We walked into the pub part of Bentspoke and went straight upstairs to what looks like a European-style beer hall where the long tables were already full of happy customers.

Here we are taking notes as Richard and Tracy tell us about their brews: 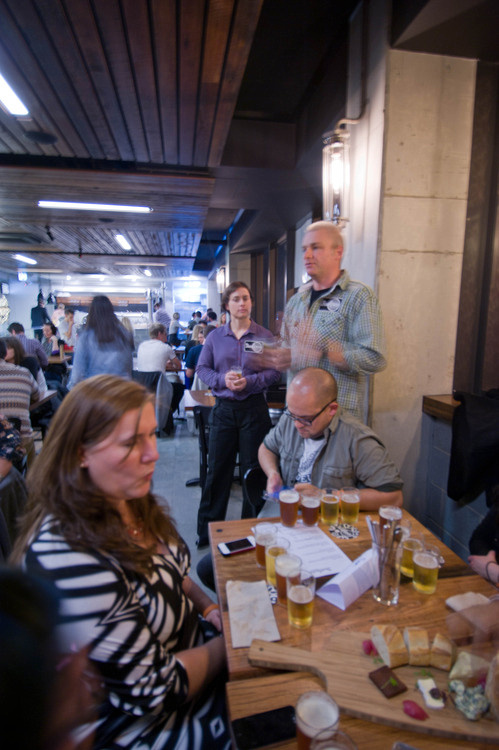 When you go, take time to look at all the little details in the décor that link this space’s name with what it does.  Richard and Tracy are keen cyclists. 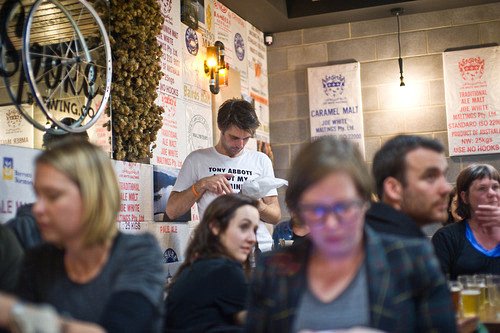 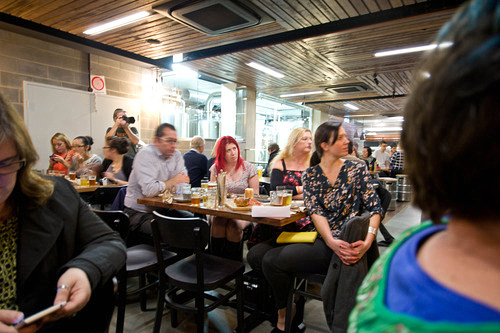 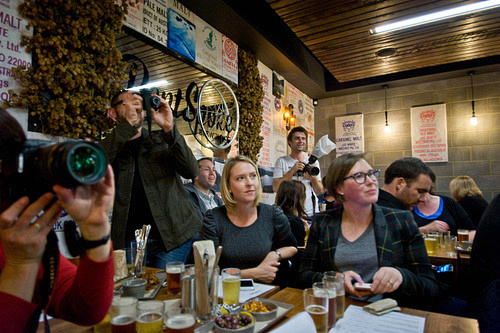 The 6 fresh beers on tap are unique in comparison to what most other brewers are doing.  The Barley Griffin ( see what he did there?) an oregano infused beer is one of the showcased beers on tap. 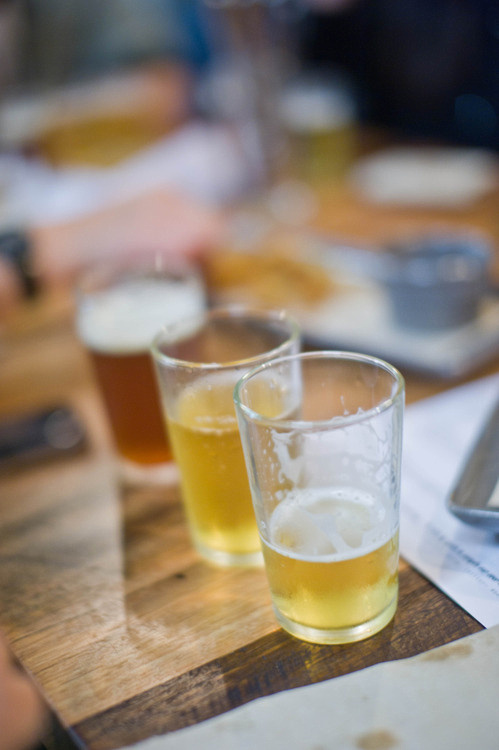 Crankshaft has a lychee fragrance that I could smell.  It is currently their biggest seller.
The Dick Tracy is a ‘fruity nutty’ beer they have named after themselves.  Who is the fruity and who is the nutty?  Get to Bentspoke and find out over a pint.  :)

With an 18 tap potential, there are plans to brew more new beers soon

Richard talked to us about cider.  It is a palate cleanser.
Lots of ciders are back-sweetened with apple juice as they have been over-fermented and have no sweetness of their own. Bentspoke does not ferment its cider dry but ensures that it retains the sweetness and the apple flavour.
They use Granny Smith apples for tartness and Red Delicious for sweetness.
Richard told us:
'The secret to a good beer is getting the hops right. Not too sweet, not too bitter.' 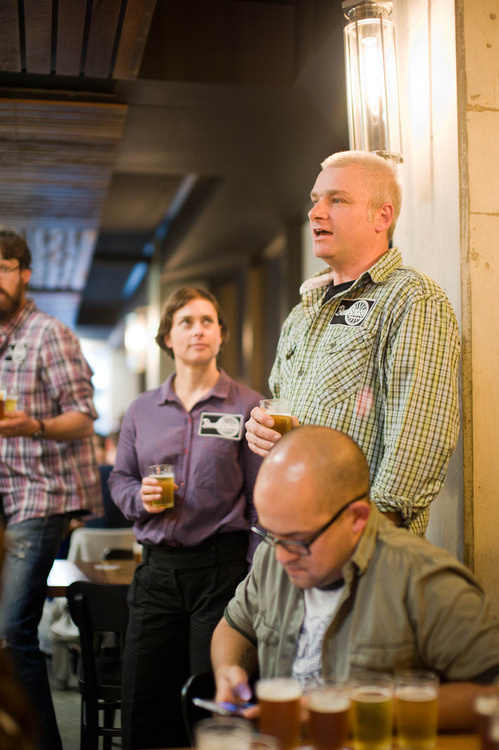 Dan Watters becomes animated as he talks about the homegrown brews here: 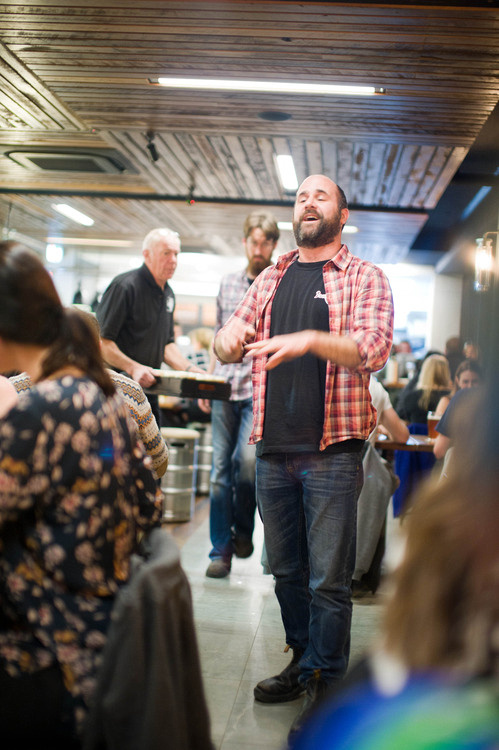 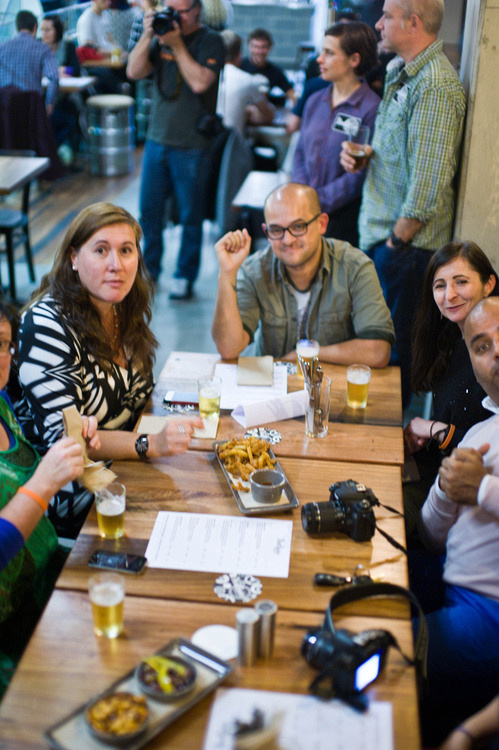 The food was awesome too…..but it needed to be photographed first: 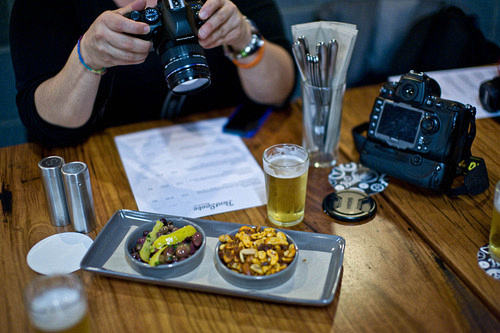 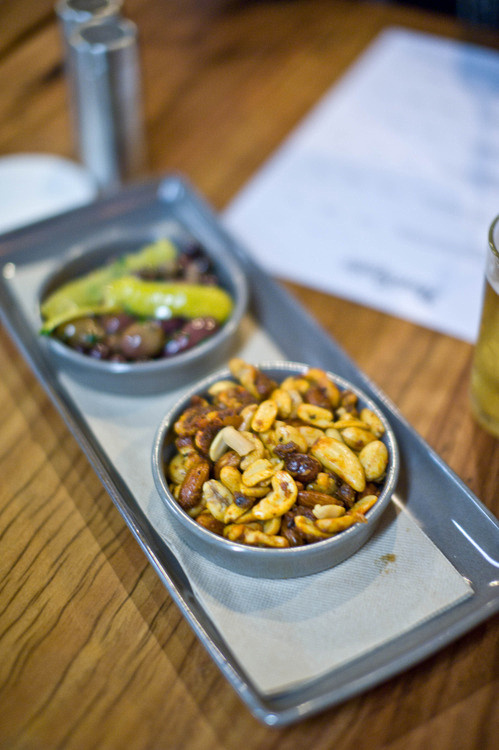 Ploughman’s platter with pork pie.  I didn’t get to taste the pie, but everything else on that plate is spot on.  No two flavour sensations  were the same.  I loved the crusty chunks of bread we had to tear into.  It was an interactive communal eating experience.  The best type. 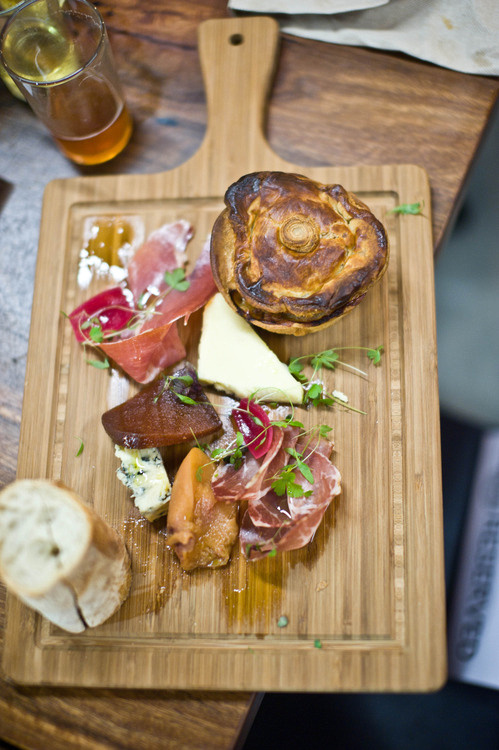 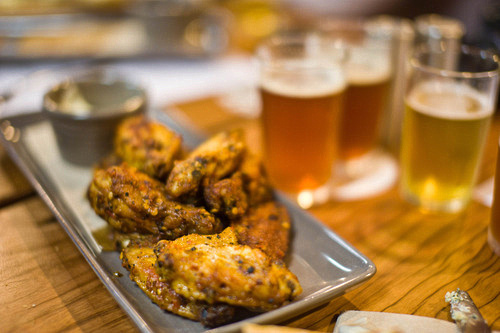 The chips were just fantastic!  The crunchy crust; I don’t know what it was but I seriously want to break in to their vault and get the recipe!!! 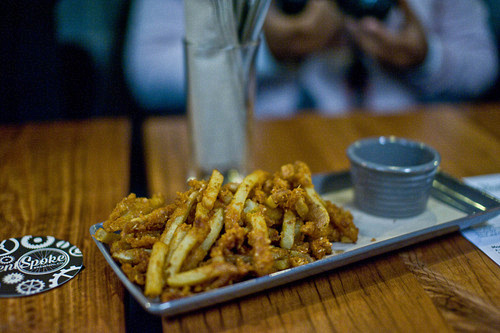 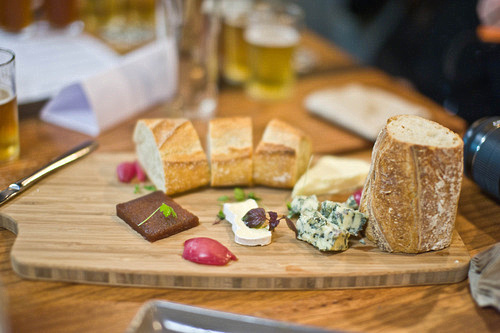 Richard and Tracy showed us where the magic happens upstairs where  the big tanks hold 2500 thousand litres or 5000 pints. 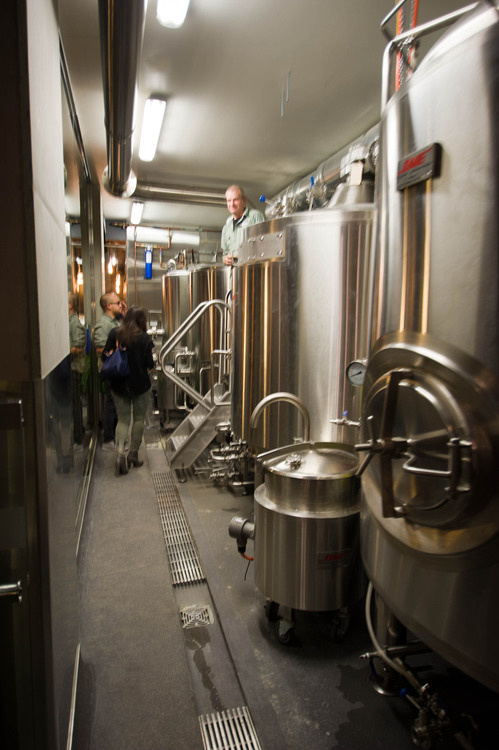 The beer ferments 7 days, then it is chilled down and the yeast settles down to the bottom. 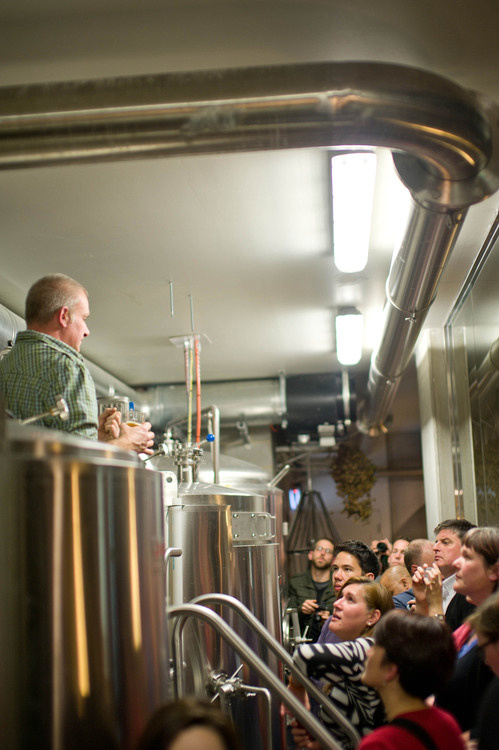 The sacks that hold the ingredients are put to good use: 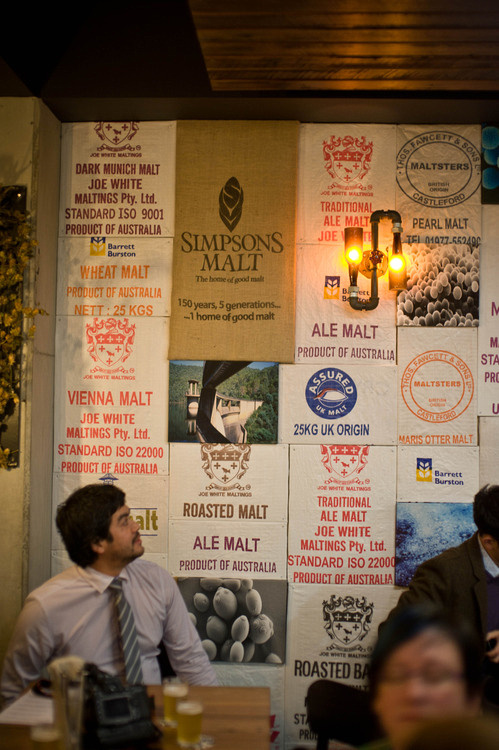 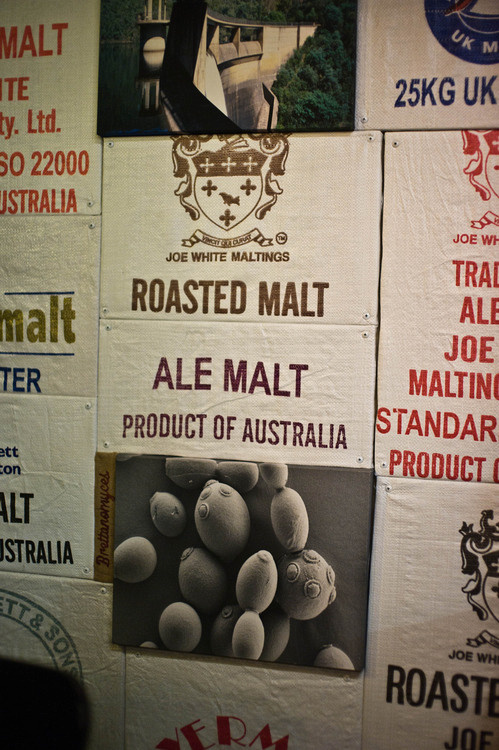 More examples of how Bentspoke Brewery incorporates bicycle ‘stuff’ into its décor. 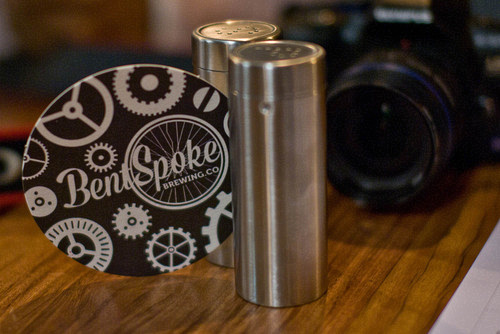 Check out the light.  Take a real good look: 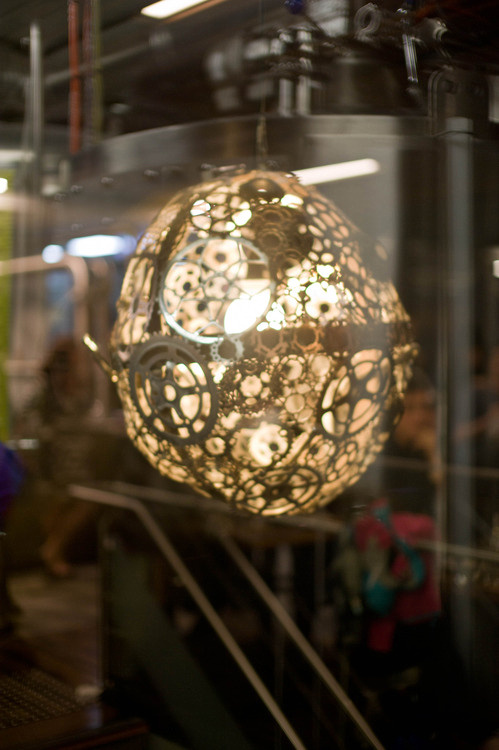 And see those staircase railings?  They double as pipes that carry the beer downstairs.  It is a real wow factor to know that the beer you are drinking is being made on site.  And to have it all on display, happening around you gives the place a real buzz.  Like being in a  bee hive! 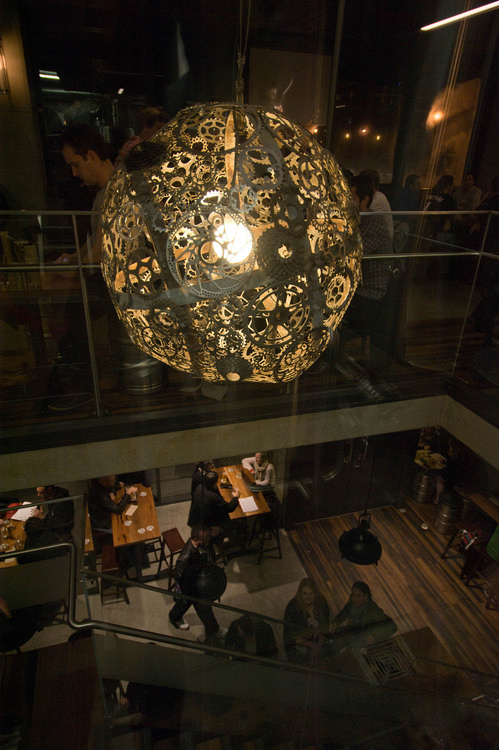 I love all the exposed pipes.  This is downstairs in the pub space: 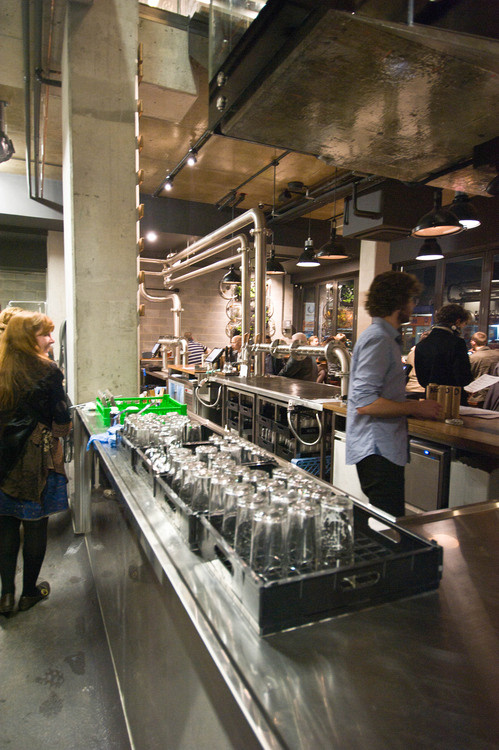 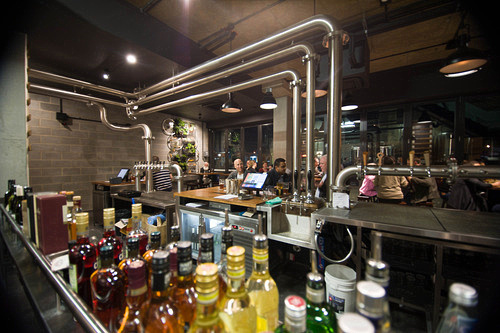 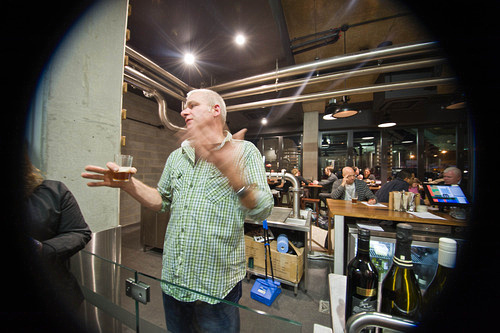 What a great night!  Bentspoke is family friendly - there were several kids there eating dinner with their parents.  The place was packed and the vibe was warm and friendly.  You will find Bentspoke Brewery on the corner of Mort and Elouera Streets in Braddon.  I cannot see a contact number for them but they can take 170 people comfortably inside and have outdoor seating as well.

website agency(non-registered)
First I observed approximately them on the net, and after linking to them I was clearly at ease!
Parallel Profits Steve Clayton(non-registered)
It feels awe-inspiring to read such informative and distinctive articles on your websites.
tubemate mp3 + youtube + download(non-registered)
The information in this blog is extremely useful for the people.
obgyns(non-registered)
You fully match our expectation and the selection of our data.
Pamela(non-registered)
This article is actually remarkable one it helps many new users that desire to read always the best stuff.
No comments posted.
Loading...
Subscribe
RSS
Recent Posts
Commit No Nuisance event at La De Da-the short of it Parliament House- the short of it Bentspoke Brewery- the short of it. Questacon and our VIP trip to Mars- the short of it Choose your own adventure- The Poacher's Way The Australian War Memorial- the short of it Dickson Tradies/ Canberra Raiders- the postage stamp version Photographing things beginning with 'B' Frugii at the Handmade Markets National Archives of Australia - the short of it
Keywords
365 Canberra Kazuri Photographer Photography newborn Portrait humanbrochure recipe art
Archive
January February March April May June July August September October November December
© Kazuri Photography
Powered by ZENFOLIO User Agreement
Cancel
Continue